This plaque memorializes the 12 children and one teacher who died in the May 2, 1929, F2 tornado that hit Rye Cove school just after noon recess.  It is known as the deadliest tornado to ever hit Virginia.  There’s a sad account of the day after the tornado here.

Posted in Photography by Bob Lawrence | Leave a comment

Two cards with a difference 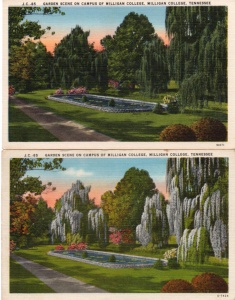 See how the same picture, more than likely originally a black-and-white shot, has been airbrushed differently in the two issues.  The top card is not postmarked, but the word “Post Card” on the back is in a typeface that was used in the 60s.  The bottom card is postmarked with a 1947 date.  Here are the backs of the same cards: 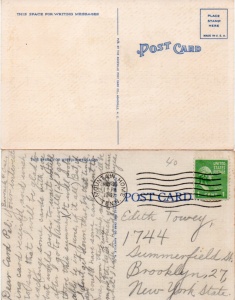 I see this a lot.  The original picture was probably taken after WWII.  When someone ordered up a run of this card later on, APPC just recycled the picture and adjusted the colors to create a different-looking card.

I used to drive past this edifice back in the early 2000s.  It was derelict then and I used to wonder when someone would have mercy on the once gracious building and take it down.  That happened in 2008.  It had taken 20 years for the Sycamore Shoals DAR to scrape up the money to build this hospital, which opened up in 1925, taking the place of a smaller St. Luke’s hospital over on 10th Street (that hospital had been built in 1908).  This hospital was made redundant in 1953 when up went Bristol Memorial Hospital, which met its Waterloo when the remote Bristol Regional Medical Center was built in 1994.

This is standard, run-of-the-mill Asheville Post Card Company issue, early 50s, probably.  There is a car in the picture, behind the tree.  Inventory number of the card is E-4666.

This card had faded somewhat, so I brought the color up and used an all-purpose unsharp mask.  It’s a Haynes Publishing Company (Roanoke VA) issue from the early 60s.  Haynes cards that haven’t had a lot of light exposure tend to have bright colors.  Joyce Haynes and C. H. Ruth, the agents who shot all the pictures in the area, were probably using Kodachrome.  Damn fine film.

The title on the front, btw, is the font called “Brush script” in Microsoft Word.  Back then, they were probably carving each letter out of soapstone or something… 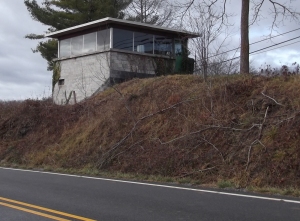 This square building at 36 49 13.53N, 82 16 17.55W, overlooking Highway 71 about .9 mile toward Dickensonville VA from the Dorton’s Fort historic marker,  has puzzled me for several years.  We always seemed to whiz past it and speculate about it, but never stopped to actually look at it.  I did so today.  It was the office of:

Turner A. Gilmer, Jr., according to my research, died in 2011 at 90 years of age.  His father was a banker and his mother was in journalism.
Turner A., Jr. lived in Castlewood.   The corporation was in farming and livestock.

Looking inside the building, I saw a big world map hanging on the far side window, apparently to block the late afternoon sun.  There were working tables, a drafting table, a boat anchor of a computer and CRT and miscellaneous papers and files.  It looked pretty abandoned.

Great place for an office.  360 degree view!  And right across the highway is this: 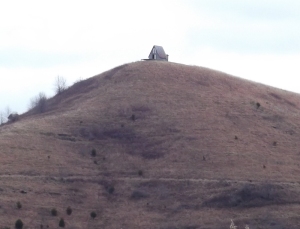