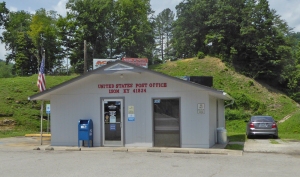 Kind of standing by itself beside a convenience store just off the highway, this post office designation dates from 1898.  It’s first postmaster was named Isom Sergent, but the story is (according to my Kentucky Placenames book, cited elsewhere) that the community was named after George Gideon Isom, an early settler.  The community is now known as The Stock Sale.  The post office is about 5.5 miles NW of Whitesburg KY.