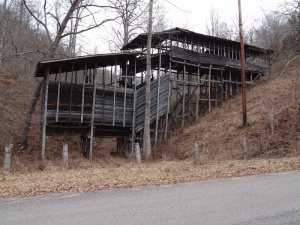 This amazing, hand-built wooden tipple is at 36.824822, -82.99707, in Lee County VA.  It’s on Reeds Creek Road (766), off 606.
By luck, the two Reed sons drove by and stopped as we were leaving.  We got to talking and they told us the tipple was built by their father in 1945.  He hauled the support poles from a wooded area a mile or so down the road.  Hauled them using mules, according the sons.  There was a short tram line that ran from one of the mines a short way up the valley to the top of the tipple (one of the tram cars is still parked in the upper tipple level – you can’t see it…the shadow up there is from a Holland hay baler that’s also parked there).  The other mine was across the road.

The mine and tipple were in operation until 1971, when the productive coal ran out.

This is an interesting vehicle.  Here’s the front of it: 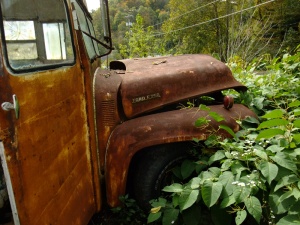 In the first picture, there’s a name that’s been partially covered by an added tow ball.  I think it’s “Ward”.

This is off Hwy. 803 near Dorton KY, quietly rusting away.  I’m searching for information.

This is on Stanley Valley Road.  The sign reads, I think, “Blar’s Grocery”.

This one, on Caney Valley Road at Fields Gap Road, is the former R E ROLLER GRO 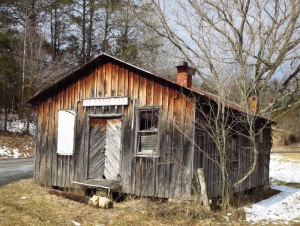 Both of these were taken with a Canon PowerShot ELPH 330 HS.  They’ve been Photoshopped only to improve contrast.  I blew out the photon wells when I took the first one, but the second one is a little better. 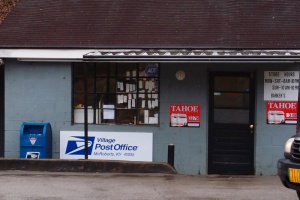 Notice what I think are bounced checks taped to the window. My stepdad had a little grocery store for a while.  He got a lot of bad checks, too.

Posted in Photography by Bob Lawrence | Leave a comment