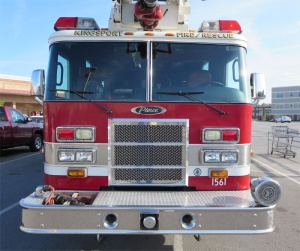 Marrowbone is north of Elkhorn City KY on 460/80 between Draffin and Millard.  Wiki says it’s been known at Regina, but I see Regina a couple of miles to the east.  These trucks were sitting outside the Volunteer Fire Department.  We’d smelled wood smoke coming in and saw a haze of smoke.  This is why I didn’t get a picture of an unusual truck parked in their station bay.  Just as I walked up, the volunteer fireman on duty closed the door and was hurrying off.  He said he had to go help the others fight the forest fire up the road.

This is its badge: 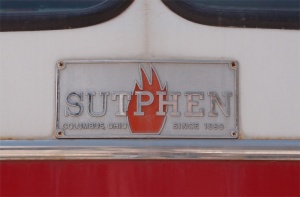 I can’t dig up much information about this community in Pike County except that it was once known as “Marrowbone Coal Mine” (Marrowbone is a nearby community).  I was taking some pictures of two fire trucks at the Lookout Volunteer Fire Department when I spotted this building a couple of blocks distant.  This is choice.  It has some age and the signs are somewhat unusual (note the triangle shape between the “L” and the “o” in Lookout on both signs).  The post office, according to Google, closed in 2011. Flag’s still flying, though.

This is from 1950, published by Curt Teich & Co., Inc,. Chicago, U.S.A.  There are nine views.  On the reverse are general area scenic views.

My dad once worked at Oak Ridge, well after these pictures were taken.  I can barely recall seeing this town when we’d drive down from Morristown to pick dad up for the weekend. 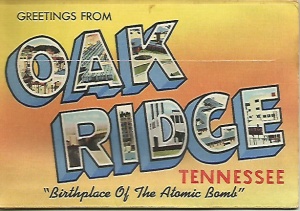